If that’s what you thought, you’re not alone. Many people think Kananaskis is a park. But you’re also not completely wrong – lots of Kananaskis is indeed a series of provincial parks. But it is a difficult region to classify because it is not a distinct park or a region with a single classification. In fact, there are a variety of different types of regions within Kananaskis, including:

About one half of Kananaskis contains 5 provincial parks, 4 wildland parks and 47 recreational areas all in Kananaskis. Then the other half is public lands with no protection.

All of that – all the parks and public lands – is in an area that is two-thirds the size of Banff National Park. 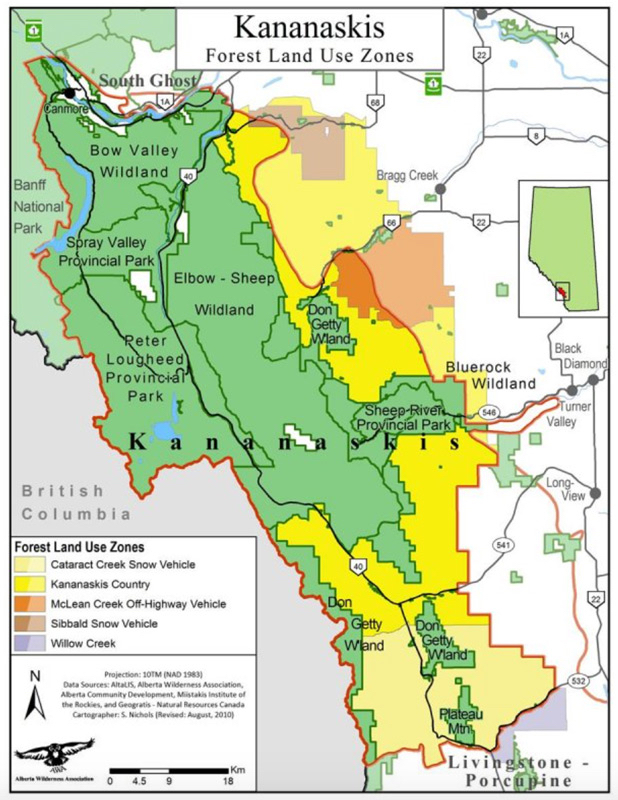 These various regions in Kananaskis have different provincial departments that oversee any development. As a whole, Kananaskis is classified as a municipal region as the Kananaskis Improvement District. The Land Use Order that directs how the land and resources are used sets out goals that are as broad as the region’s definition:

“The lands within KID shall be put to uses that balance the protection and preservation of the natural environment with planned, beneficial and orderly Development”

Within the Kananaskis Improvement District, all land is classified as one of six land uses.

The purposes of the parks are clear, and their development is guided by the provincial government. These are the regions that most Albertans are familiar with. Ecological reserves are protected areas where the wildlife, plants or landscapes that are considered valuable. The intents of these areas are also pretty clear.

Public lands is the category that has the broadest definition. The rest of the land in Kananaskis that isn’t a park, wildlife reserve, recreational area or under the direct control of the Kananaskis Improvement District is public land. Priorities for these regions are equally broad – the land use is determined by the Public Lands Act, the Forestry Act and recreation policies and resource plans.

Public lands make up a major part of Kananaskis. Nearly the entire eastern and southern borders of Kananaskis are public lands – meaning they are not explicitly protected as parks for wilderness or recreation.

That’s where logging can happen.